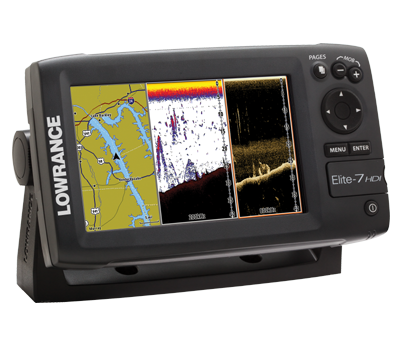 This series of fishfinders/chartplotters from Lowrance is aptly named “Elite.” A brilliant, 800×480 pixel widescreen 7-inch display gives you super clear pictures from the Broadband and 3D SONARS or GPS mapping packages.

The 7-inch display is, hands down, the feature worth the money. To put this into perspective, the screen is just a little smaller than the screen of an iPad Mini. HDI(Hybrid Dual Imaging) technology means you have the power of two imaging systems melded seamlessly into one, differentiating very clearly between fish arches and structure, showing you the bottom clearly too.

A Track-Back feature allows you to go back into sonar history so you can rewind the SONAR readings and study them at your own leisure to make sure you didn’t miss anything. If you have the GPS on, the trackback will show GPS data too, so if you find something you missed in the SONAR history, you can navigate back to that spot.

You can choose 455 kHz sounding for wider and deeper sonar imaging coverage, and 800 kHz for enhanced viewing of targeted locations. Comes with standard 83/200 kHz sonar as well to use in deeper water and at higher speeds to scout for locations.

Mark waypoints at your favorite fishing spots so you will never forget where you caught “the big one” again! Comes pre-loaded with BaseMap or Navionics. Basemap is a very basic map, not completely reliable for navigation. If you plan on using this heavily for chartplotting, you will need an extra charting package.

Navionics Gold Charts show contours like paper-charts, and can show entire continents, but when you zoom in, still gives you an accuracy of up to one meter!

BRIDGE BETWEEN ELITE AND HDS:

The Lowrance Elite-7 HDI is a bridge between Lowrance’s Elite series and theÂ higher-end Lowrance HDS series. Previously, the ability to have both Broadband SONAR and DownScan SONAR was only available in HDS series units, and that too with the additional LSS-2 StructureScan Module.

Now, the Elite-7 HDI brings you a larger screen than the HDS-7, as well as all of the SONAR technology and mapping technology that was available in the HDS, too, at a lower price!

If you don’t need the more advanced networking features of the HDS Series, but want the Broadband and DownScan SONAR, then the Elite-7 HDI is an excellent choice for you.

The generous 7 inch screen allows you to view a LOT of data on one screen very comfortably. You have a choice of either viewing just charts, just Broadband SONAR, just DownScan SONAR, or a combination of any two or three of those. You can view Broadband and DownScan SONAR side-by-side to compare two readings together, and you can even do a three way split to see all three things at once.

There is also an option in the menu for adjusting the size of either panel. The default setting is all three panels will be of equal size, but if you would like to see one with more space, you can easily resize the panels.

USE IT WITH ONE HAND:

All the buttons are on the right side of the screen, so you can easily operate the unit with just one hand – or even one thumb, for that matter! A tap of the “pages” menu will let you cycle through pre-set split screen options, and the menu and four-way keypad are also accessible for operating on the fly, so you can have one hand on the wheel or motor and you can comfortably use the Elite-7 HDI unit with your other hand.

The Lowrance Elite-7 HDI has three plugs in the back: one for power, one for SONAR, and one for NMEA 2000 networking. NMEA 2000 is the standard through which data is shared from one device to another in all marine applications.

You can use the NMEA 2000 port to share GPS and waypoint data between your existing chartplotter to your Elite-7 HDI unit. This is especially useful when you are upgrading to this unit and you already have a GPS unit which has lots of waypoints saved in.

Instead of having to painstakingly make new waypoints(since you would have to go to every single spot again!) you can just hook both units up using the network port and share your data instantly.

The Lowrance Elite-7 HDI is really easy to install. You can use a gimbal mount to fit the unit flat onto any surface. The gimbal mount lets you tilt the fish finder up and down, but you will not be able to swivel it.

The other option is to use a flush(or in-dash) mount, which can fit comfortably into your boat’s dashboard. This is a pretty extensive DIY project, so if you aren’t too sure on how to do it, you should get it installed professionally.

TheÂ installation ManualÂ has a detailed schematic that you can stick on to your dashboard to guide you with cutting, and is a good reference.Â The transducer is really easy to mount, as it works like any transom mount transducer. Mount it on the transom, make sure that it is parallel to the water surface(not titled), and in a position that always remains submerged in the water.

You only need to run two wires: one from the transom mount transducer to your head unit, and one from the head unit to the power source.

If you have an existing transducer (Airmar or Lowrance) that has a blue plug, and you want to use it with the Elite-7 HDI, you will be able to, but you will only get Broadband SONAR.

Meridian Salmon looks to stronger moorings after loss of cages in...