Among some fishing enthusiasts, there is a debate over what type of reels are the best fishing reels. Is it bait casting reels or spinning reels? While some fishermen may favor one type of reel over another, the truth of the matter is that both of these types of reels have their advantages.

The biggest advantage to spinning reels is that they can tackle a great variety of different tackles – both live bait and artificial lures. They are especially good for lighter types of bait and tackle. It’s also a good reel for those people who are just starting to fish because it’s easy-to-use, although there are plenty of experienced fishermen who still think that the best fishing reels are spinning reels.

Of course, a lot depends on how well these types of reels are made and there are some not so good ones on the market today. Which is why it’s important to consider spinning reel reviews and choose the best reels possible. In order to help you with that goal, we’ve listed some of the best spinning reels that we’ve found so far. The following are models that are versatile, easy-to-use and just plain get the job done.

Designed with the needs of the saltwater game fish fisherman in mind, the Penn Battle II Spinning Fishing Reel is a well-constructed reel that has an entirely metal body and side plate and also heavy-duty rotor. This design not only allows you to cast further but also gives you the leverage you need to pull in the really big fish. Handy features of this reel include its anti-reverse bearing that helps to prevent pullback while the fish is being reeled in and an HT-100 Versa Drag System that provides a smooth and powerful drag. Other features that can be found on this reel include a 5-stainless steel ball bearing system with 1-reverse bearing and line-capacity length markings that allow the fishermen to see how much line they have left just by looking at it. When combined together, all of these features make this the best spinning reel that you can currently find.

The Pflueger President is a spinning wheel that has several distinct features that are sure to intrigue both the amateur and the experienced fisherman. It features a light graphite rotor and body that has 9-stainless steel ball bearings and an on/off anti-reverse bearing. It also has a double anodized aluminum spool that and a multi-disc drag system. All of this comes together to create a reel that’s not only lightweight but also offers pretty decent responsiveness and durability. It’s a great reel for taking out on the end of the dock to pull in a variety of small to medium-sized fish.

With an ambidextrous design that allows both right-handed and left-handed fishermen to use this reel easily, the Okuma Ceymar is a spinning reel that comes in a variety of different models and has a 5.0:1 gear ratio, a 7 ball-bearing and 1-reversing bearing system and a multi-disc drag system. The C-30 model is perfect for jigging walleye and uses line up to 8-pounds in capacity. The C-40 model is designed for catfish and steelhead, while the C-55 model is best used for saltwater fish applications. And if you’re looking for a reel that can handle big water fishing, then the C-65 can cast for long distances over reefs and can be used with a 15-pound line to pull in some pretty big fish.

The Penn Pursuit II is a fishing reel that features a 4-stainless steel ball bearing system with 1 anti-reverse bearing, a high-quality graphite body, and rotor, an oiled felt drag system and aluminum side plate. Another design feature of this reel is its line capacity rings that allow the angler to see exactly how much line he/she has left. This reel is designed to be the go-to reel for anglers who need a little bit more power but don’t want to bust their budget. It’s also a good reel for the fisherman who needs a piece of equipment that’s durable and will last if it’s given the proper care.

The average saltwater fisherman knows that not just any reel can be used for big water fishing, it takes one that’s specially designed for the job. And the designers behind the Penn Spinfisher V SSV3500 know this as well because they have designed a spinning reel designed for saltwater applications. It’s has a body that features an all-metal design, has 5 stainless-steel ball bearings paired with an instant anti-reverse bearing and a trip ramp for long distance ocean casting. This reel is sure to provide the saltwater fishing enthusiast with the right blend of durability and practicality they need in even the most demanding saltwater environments.

The KastKing Centron 3000 is a fishing reel that doesn’t believe that you should give up quality just because you don’t want to spend a fortune on a reel. Which is why they provide a high quality reel that has many of the same features that more expensive models may have. This includes a 9+1 ball bearing system with a 5.2:1 gear ratio built into an attractive yet lightweight graphite frame. This reel also offers 13-pounds of drag and has a hardened metal shaft with a machined pinion gear. Everything that the average angler needs to pull in the fish they’re trying to pull in, all without a whole lot of hassle.

The KastKing Kodiak is a saltwater spinning wheel that’s not only designed to hold up against harsh saltwater and sandy environments but is also designed to provide excellent performance It features a body design that is made from anodized aluminum alloy and is made to hold up against even large game fish. It also features fortified brass gears, a thick stainless steel main shaft and a specially designed carbon-fiber drag system that gives almost 40-pounds of stopping power. While all of those features are impressive, it’s 10+1 stainless-steel shielded bearings are what really make this reel the perfect saltwater fisherman’s companion.

The Daiwa Revros 2500H is a fishing reel that’s designed to deliver a nice and easy cast, as well as a smooth retrieve. It is manufactured using Daiwa’s premier Digigear design system that ensures each and every cast is optimized to deliver the best possible results. This spinning reel features a 7+1 ball-bearing system, an ABS aluminum spool, and an air rotor – all in a composite body design that’s durable and yet lightweight. All of these features combine to make a spinning reel that not only has some of the features one would expect in an advanced reel but to do it without breaking the bank.

The Yongzhi line of fishing reels provides cutting-edge performance with advanced design features to create a spinning wheel that can handle a variety of different types of fish as well as a variety of different water conditions. It features a 13+1 ball-bearing system that has instant anti-reverse and provides a smooth cast and retrieval of the line. It also features a heavy-duty metal main shaft, interchangeable left and right-hand handles and a stainless steel high capacity spool. This reel combines great drag power with a precise pinion gear system to help deliver the best results each and every time.

Goture Freshwater/Saltwater Fishing Reel combines a nice design with decent performance to give fisherman the versatility and power they need for small to medium sized fish. It has a sturdy and high-quality graphite rotor and frame that’s been paired with a double-anodized aluminum spool. Other features of this reel include a 6+1 ball bearing system and a multi-disk drag system. It’s a well-designed and attractive reel that holds up well, even under tough conditions. While this isn’t the best reel that’s currently available, it’s still a good reel for just about any angler looking for a modest yet effective spin reel for their next fishing expedition.

Picking the Best Spinning Reel for the Money While spinning reels have been in use since the mid-19th century in North America, their popularity declined when other types of reels were introduced. However, it seems like the pendulum has once again swung back and these types of reels are now back in fashion due to their convenience and ease-of-use. As a result, there are more of these types of reels on the market than ever before and they offer a seemingly endless amount of options. Which presents somewhat of a conundrum because it now seems more difficult to choose among all of the different options that are now available.

Choosing the best one doesn’t have to be a challenge, however. Not if you take the time to learn about how spinning reels are currently designed and what materials are now being used. With a little patience and thought, you can browse through spinning reel reviews with ease and confidence. Below are some things you need to keep your eye on.

The first thing you’ll want to take a look at is how the reel is constructed. Today, there are two main materials that most reels are constructed from and these are aluminum and graphite. The advantage of aluminum is that it’s stronger than graphite and is firmer. However, it’s also a bit heavier than graphite. Graphite has the advantage of being lightweight and usually less expensive. Most anglers use aluminum reels for freshwater fishing and graphite reels for saltwater fishing due to graphite’s resistance to corrosion.

Number and Quality of Ball Bearings

While there a variety of different ball bearings and bushings available on the modern spinning reel, generally you’ll want to find a model that has the largest number of ball bearings available. Usually, the more bearings a reel has the smoother it will handle. You’ll also want to choose a model that has a roller bearing. These models can be easily be found by looking for models that have a +1 (for instance, 8+1 or a 13+1).  There are many types of bearings available, but stainless steel ones are usually the best. And if you want a reel that has even better control, then choose one that has sealed stainless steel bearings.

Most of the top quality reels on the market also have a feature called anti-reversing. This feature keeps the reel’s handle from heading backwards at the most inopportune time. Sure, you can fish with a model that doesn’t have an anti-reverse feature – and fisherman all over the world do it all the time–but why would you want to.

The Gear Ratio of a Reel

Choosing the best reel possible is one of the most important decisions a fisherman can make. Which is why you should consider all of the features a model has and read the reviews for it. After all, it’s a very important decision. If you choose the best one that you can afford, then you’ll end up with a tool that will help you all of the fishing expeditions ahead of you. 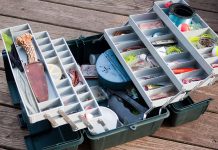