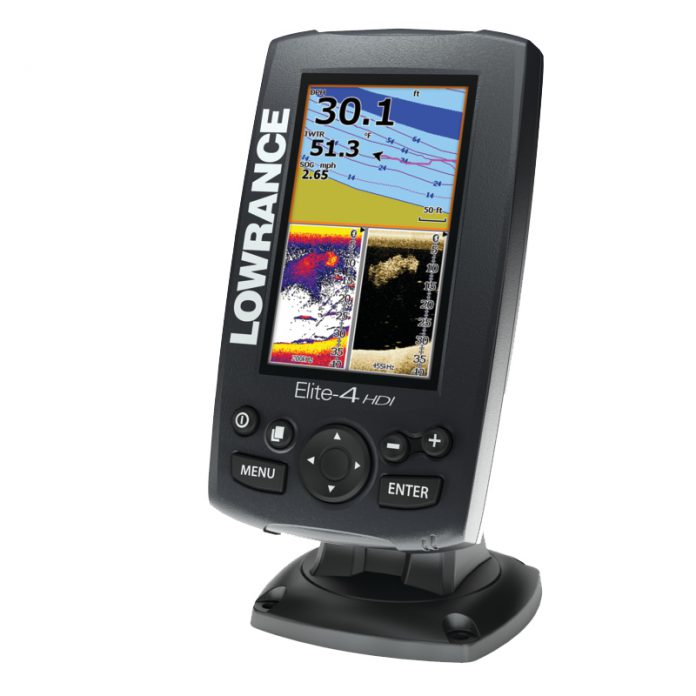 If you are looking for something that doesn’t cost too much, but still delivers a powerful fish finding punch, you don’t have to look any further than the Lowrance Elite-4x HDI. The Elite-4x HDI is the newest addition to the HDI family, and packs the same power as its bigger siblings, the Elite-5x and Elite-7x HDI.

HDI stands forÂ HybridÂ DualImaging – which is a combination of both traditional broadband SONAR(think blobs and arches) to DownScan SONAR(which shows a much better picture). The best part is that you only need one transducer!

This makes the Elite-4x HDI a great choice for small boats and kayaks – and for beginning fishermen who want the best technology but don’t want to spend too much. The transducer combines two regular frequencies(usually 83/200 for freshwater and 50/200 for saltwater) and two DownScan frequencies(455/800 kHz).

The Elite-4x HDI is the GPS free version of the Elite-4 HDI – it is significantly cheaper, and well worth it if you don’t want the chartplotting capability. However, if you are willing to spend a little extra, the Elite-4 HDI has excellent maps and the ability to combine SONAR and mapping data into customized maps.

The HDI series has an amazing feature that combines the benefits of DownScan and traditional SONAR. DownScan is primarily used to find structure – it’s not very accurate for spotting individual fish. For that, you are better off with traditional SONAR.

The Elite-4x HDI has bridged that gap with DownScan overlay – now you can see one screen that shows bottom and structure with DownScan images – so you can see every tree, rock, and submerged object for what it is – and it will also show suspended arches from traditional SONAR, which are most likely fish. This way, you can catch those sneaky fish that are hiding deep inside cover – which you couldn’t have normally seen with either a traditional or DownScan SONAR.

This fish finder sports a brilliant LED-backlit display which makes it really clearly visible even in bright sunlight. The size is a little bigger than previous Elite-4x models, so there is a significant increase in the overall screen area. This lets you view split-screen on a smaller display.

With such a generously sized display, you can now see more than ever before. If you have ever used the Elite-4x series before, the HDI is going to be a giant step up. You can now split the screen three ways on this little guy, giving you data like never before.

So now you don’t have to break the bank to get functionality like this. Even if you are using a kayak, or only have space for a compact fish finder, you don’t have to sacrifice power and features for size anymore.

The Elite-4x HDI has a new page selector menu that you can use to switch between screens using just one finger – no more complicated menus! So whether you want to see just SONAR, just DownScan, or a mix of both, all you need to do is literally lift one finger.

The Elite-4x HDI also comes with Lowrance’s signature Advanced Signal Processing technology which automatically adjusts the SONAR signal to make sure you are seeing the best possible picture. While advanced anglers may prefer to do this manually, the automatic feature is great for you if you don’t want to bother with little tweaks here and there – the software in the fishfinder itself will always try and give you the best image possible.

Transfer of knowledge regarding fish farming from NIFES to Mauritius